Well, so the 'ole traffic light I wrote about earlier has become a little obsolete recently, and so I wanted to give it a little overhaul. In my original post I already mentioned the four sides that it has, but since I was kind of lazy with the original build, only one side was actually connected. Also, since I kind of like the idea of integrating this into the PiLight system, I wanted to make the lights on it dimmable.

Since another project I'm currently working on will incorporate the PCA9685 chip, this is a good chance to try out a small part of the circuit before going large, and also makes the traffic light worthy of its own posts on this blog.

Here's a picture of the board I designed for this little project. It consists of a PCA9685, two ULN2803 amplifiers, a set of pre-resistors for the LEDs, and some more SMD passives for the configuration of the PCA.

I took some photos during the etching process for documentation. I'm working with the direct toner transfer method mainly because it's much more convenient (once you have access to a laser printer), but also because it requires less chemicals.

The first step is to cut out a piece of board that fits your dimensions.

The next step is to transfer your design onto the actual board. This process involves a sheet of glossy paper (I just tore out a page of an old Reichelt catalogue, but from what I read most glossy magazines should do), some acetone, an iron, a bowl of soapy water and a brush.

I noticed at that point that the ground plane on the right side wasn't correctly transferred on. I would have been able to fix this by starting over, but since the plane in question was non-functional I didn't bother.

The board is now ready to be etched. (DISCLAIMER) Please note that the chemicals used in the following steps are dangerous and can seriously harm your health, clothes, workbench and the environment if used incorrectly. I will not take responsibility for any harm caused by you after reading this. (END OF DISCLAIMER)

The only thing that needs to be done now is to put the board into the etching solution of your choice. I'm using ferric chloride (Fe3Cl) basically because it was the only ethant available at our local electronics store. It works perfectly at room temperature, and will etch a board in typically twenty minutes.

After about twenty minutes the board is usually ready to be washed off, the exact point of time however is best determined by repeated visual inspection of the etching process. Once all the non-printed areas are clear of copper, the board is finished.

This is what the board looks like after etching and cleaning: 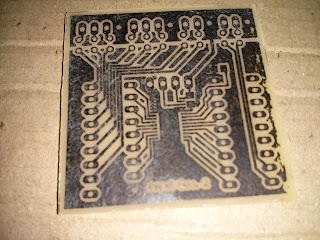 To get the toner back off the board, simply use acetone: 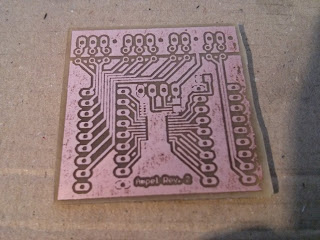 After doing some quick measurements I noticed that some of the traces obviously were too close together, resulting in shorts between some of the leads. I had to cut them up using a utility knife: 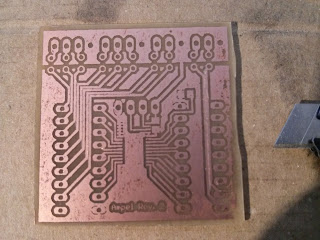 Next step is to drill the holes for the through-hole components (I used a 0.8mm drill and a dremel for that):


That's all for now. I'm currently waiting for the components for the board to arrive (I finally found a source for the PCA9685, too) and will follow up with another post once they arrive.
Posted by Jakob at 6:29 PM