Getting started with Arduino

Today I came up with another nice little contraption: 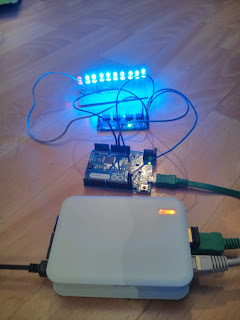 Now you're probably wondering what that is. That question is pretty easy to answer: From bottom to top, that's a Raspberry Pi driving an Arduino driving a PWM board driving a 10-LED-bargraph board.

Not satisfied with this answer? I can understand that. There's more questions behind that. Let's start with the less obvious things. Why the bargraph? It's a simple component that was readily assembled and was designed to be connected to the PWM board. It's a nice visual indicator of what's going on.

Why the PWM board? Again, the answer is: because I had one at hand. I could have used something else, but in combination with the bargraph again it gives a nice visual representation of what I was trying to accomplish.

So then the real deal is in the Arduino? From my previous projects I already know that I can directly interface the PWM board from the Pi. So basically there's not a real point in passing signals through an Arduino, or is there?

Yes there is. This is the first time I'm trying to build something Arduino-related at all, and this might actually turn out to be a nice advantage to future builds.

It's the connection between the Arduino and the Raspberry Pi that I will actually try to improve upon in the next days. So all this basically is going to be my testbed with a known-working state.

Right now I'm researching ways of replacing the connection with some kind of bus (RS485 seems very promising, and from there DMX is not far away) or even make it wireless (but most solutions appear to be rather expensive). If my idea works out, this could mean that I will no longer need a dedicated Pi for each of my devices, but instead a cheaper and smaller (think of the Mini!) Arduino would be sufficient. I might event manage to integrate the microcontroller directly onto my own boards!

And now this is an answer that hopefully gives you an insight on what really lies behind a few simple lights.